“People are my gems and gems have brought us together” 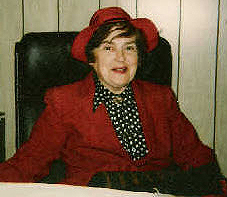 A truly pioneering gemologist, Eunice R.Miles launched her career in 1936 working alongside Dr. Edward Wigglesworth, Chair of the Mineralogy Department at the Boston Museum of Natural History. During the 1940s, she joined the Mineralogy Department of the Museum of Natural History in New York as assistant to Dr. Frederick Pough, who was the curator at the time. After presenting a speech to the New York Mineralogical Club, she was offered a scholarship from Professor Frederick K. Morris to study geology and mineralogy at the Massachusetts Institute of Technology in Cambridge.

Eunice’s introduction to GIA began at through the American Gem Society Conclave in Boston. Here she met GIA founder Robert Shipley who, like Wigglesworth years earlier, was immediately taken with the young gemologist. He offered her the chance to take his GIA certified gemology course at a significant discount and in 1953 she made history by becoming the first woman gemologist and researcher to join GIA’s recently opened Gem Trade Laboratory (GTL) in New York.

At that time the entire New York staff comprised of two others - Robert Crowningshield, currently vice president gem identification and Bert Krashes, formerly GTL vice president. While the small team split its time between research and teaching, Eunice quickly became involved with the identification of pearls through x-ray methods, a key concern of the jewelry trade in the 1950s. Her warm, outgoing personality won her the affection and admiration of colleagues and students.

As the Gem Trade Laboratory grew, Eunice continued to excel particularly in the area of diamond identification. She advanced an optical method for detection of colored diamonds proven through photographic evidence, and in 1963 she received special recognition from the U. S. Department of Mines for her research into the laser patterns of diamonds versus substitutes. Away from the laboratory, Eunice spent time studying and traveling. Her most significant trips included a photographic expedition to the alluvial diamond mining areas of Venezuela and a visit to the diamond dredge in Brazil’s Jequitinhonha River. She became a member of the International Color Council Society based in France, and studied the field of color technology at the Rensselaer Polytechnic Institute in Troy, New York. By the 1970s, “Mother GIA” had become a favorite on both the overseas and domestic lecture circuits.

Eunice’s accolades reflected her professional diversify as a gemologist, designer, lecturer and writer. In 1984 Eunice was elected an honorary fellow of the Gemmological Association of Great Britain and in 1985 she became an honorary member of the American Gem Trade Association (AGTA). In 1985 the International Society of Appraisers (ISA) presented Eunice with its “Gems and Jewelry Industry Service Award,” and in 1986 GIA named Eunice as the first recipient of the “Eunice Miles Lifetime Achievement in Gemology” award. In 1987 the Women’s Jewelry Association included Eunice in its Hall of Fame.

In 1988, the Manhattan Chapter of the GIA Alumni Association instituted the Eunice Miles Scholarship Fund to honor this extraordinary woman. Every year the Chapter contributes to the Fund to assist students at GIA Education to further their educational endeavors.